One thing I’m learning is that EVERYTHING is more work and takes more time than I think. I’m working on a Duncan Phyfe style dining set with 7 table sections and 7 chairs, but I was waiting on foam for reupholstering the chairs, 3M Safest Stripper for refinishing the table top, and Kwikwood for repairing one of the legs that was chewed up. So while I waited, I started a little side project.

My aunt had given me a bookcase and dresser that she no longer had use for. The bookcase had been outside, so it was weather-damaged. The backing was completely warped, and the bottom shelf and bottom of the sides were warped too. There were 3 salvageable shelves though, so I removed two and glued them together so that the finished edges were at the top and bottom.

I picked up some Annie Sloan chalk paint in beachy colors – Cocoa for sand, Provence for the sea, and Greek Blue for the sky, mixing in a little old white where needed. Then I just swept them across the wood and blended one into the next.

I have a sweatshirt from Old Navy that says, “Salt in the Air, Sand in my Hair” which really evokes the feeling of the coast for me. I knew I wanted a regular font but then some of it to look like it was done freehand. I opened up Word and started going through all the fonts. I found what I was looking for (although I couldn’t tell you now which ones they were). But I needed to be able to transfer that to the wood, which meant I had to be able to print it out large. I used http://www.blockposters.com/ so I needed a jpg. I took a screenshot, saved it to Paint, and then uploaded it to Block Posters.

I then printed it on multiple pages, put black chalk all over the back, taped them down face up (chalk-side down) and then traced them with a ballpoint pen to transfer the chalk. Then I hand painted them in Old White. I did the same thing with silhouettes of the starfish and turtle, which I just printed from free clip art online. Then I took some sandpaper and distressed. Viola! Quick and easy. Well, okay, painting the writing wasn’t really quick, but it was almost instantaneous compared to my Duncan Phyfe dining set… 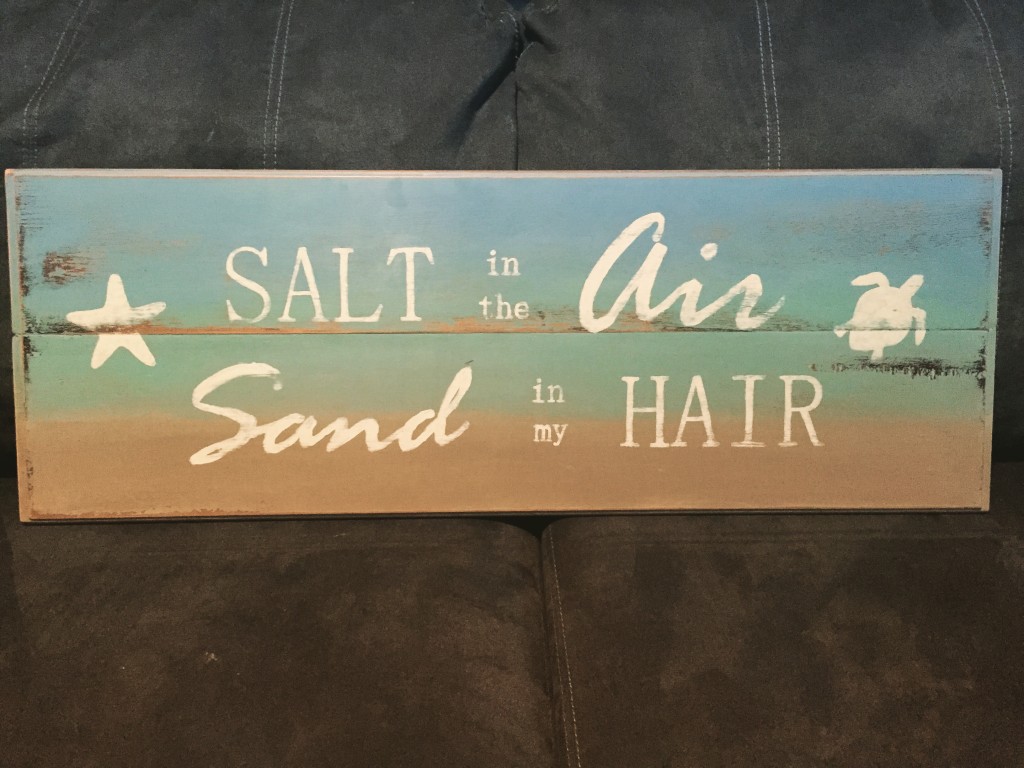